Mr. Vice President, just as we’re doing with our investigation into last week’s violent activities at the Capitol, we’re bringing our aggressive operational capabilities and deep investigative and intelligence expertise to next week’s inauguration.

As Director Murray said, while the Secret Service takes the lead in inaugural security, the FBI is the lead federal agency for crisis response, for counterterrorism investigations, and intelligence analysis. In that vein, as Director Murray said, we’ve been planning for months and months on this, which is part of what I think gives us the confidence that we have. At the FBI, we’ve set up a national command post at FBI Headquarters as well as a command post in our Washington Field Office, which I know you visited before and you would recognize.

As well, we have command posts in all 56 of our field offices. Those command posts bring together personnel—not just from the FBI but from across the government—to gather intelligence, to assess potential threats, to coordinate investigations, and to surge resources where needed. They make it possible to share information in real time and allow our personnel to continually update those threat assessments.

Those command posts are going to be running 24/7 through the inauguration and, in some cases, in the days to follow. 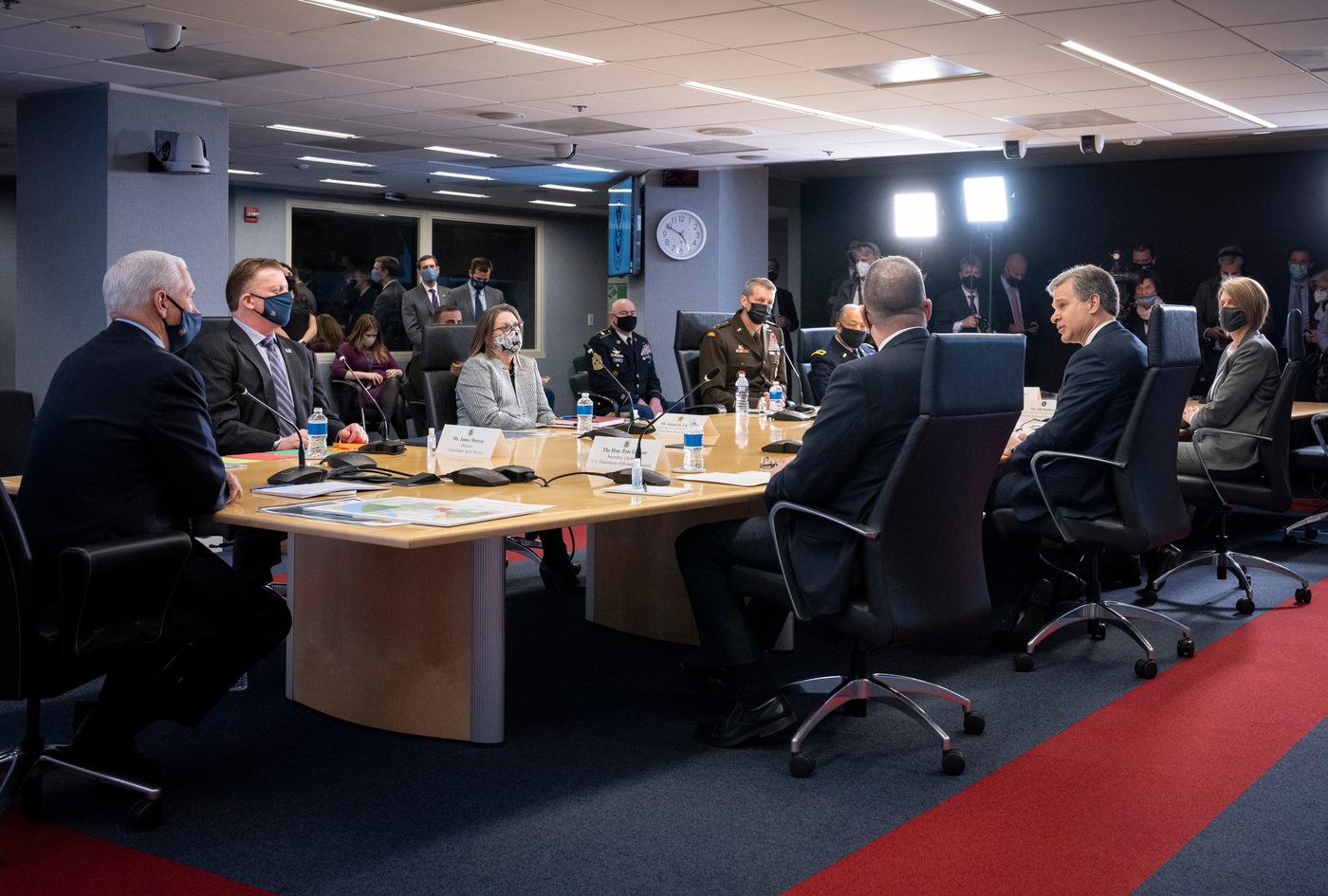 Director Wray speaks about the FBI’s efforts regarding inauguration security during the interagency briefing.

We’re monitoring all incoming leads, whether they’re calls for armed protest, potential threats that grow out of the January 6 breach of the Capitol, or other kinds of potential threats leading up to inaugural events and in various other targets. We’re latched up with all of our partners in that regard.

When we talk about potential threats—maybe I’ll just say a word or two about that—we are seeing an extensive amount of concerning online chatter—that’s the best way I would describe it—about a number of events surrounding the inauguration. Together with our partners, we evaluate those threats and what kind of resources to deploy against them. Right now, we‘re tracking calls for potential armed protests and activity leading up to the inauguration.

The reason I use the word “potential” is because one of the real challenges in this space is trying to distinguish what’s aspirational versus what’s intentional. We’re concerned about the potential for violence at multiple protests and rallies planned here in D.C. and at state Capitol buildings around the country in the days to come that could bring armed individuals within close proximity to government buildings and officials.

As you can imagine, the volume of information out there is significant, but we’ve been pushing that information as rapidly as possible to all of our relevant law enforcement and intelligence partners. If we find that an individual poses a violent threat, then we and our partners will take advantage of every lawful authority and method we’ve got to disrupt any attempt or attack. Our posture is aggressive; it’s going to stay that way through the inauguration.

In that vein, we and our partners have already arrested more than 100 individuals for their criminal activities in last week’s siege of the Capitol and continue to pursue countless other related investigations. Those help not only prevent those individuals from any effort to repeat that kind of activity, but also should serve as a very stern warning to anybody else who might be inclined to try to engage in that activity.

But we’re also taking other steps. The American people may not hear about every disruption in the media and may not see the FBI’s hand in everything we do, but they should be confident that there’s an awful lot of work all across the country going on behind the scenes, out of the spotlight, where we’re feeding relevant information to all of our partners so that they can harden targets as appropriate.

And as I said, we’re looking at individuals who may have an eye toward repeating that same kind of violence that we saw last week. I mean, from January 6 alone, we’ve already identified over 200 suspects. We know who you are, if you’re out there, and FBI agents are coming to find you.

My advice to people who might be inclined to follow in the footsteps of those who engaged in the kind of activity that we saw last week is: Stay home. Look at what’s happening now to the people who were involved in the Capitol siege. Wherever they scattered to—whether it was Memphis, Phoenix, Dallas, Honolulu—what they’re finding is that we’ve got FBI agents tracking them down and arresting them.

If I were those people, you don’t want to be the ones to have FBI agents knocking on your door at 6:00 a.m. So anybody who plots or attempts violence in the coming week should count on a visit.

So together with our partners here in the District and across the country, we’re going to be doing everything we can to ensure a smooth transition of power in the days to come. This is a team effort, and I’m really proud of the team that you have assembled here.